Wild and sensual passion will heat up the ice at the ring in the production of Yulia Piterova and Anton Kononenko, in which the duo will introduce the audience to the great school of seduction at the arena with a 1920s jazz feel. The slippery ice will transform into a dance floor on which the figure skating duo, who has been working together for more than 25 years, demonstrates an exceptionally professional performance. Yulia will also showcase her ring skills as she will perform her effortless, ethereal dance on the ring. 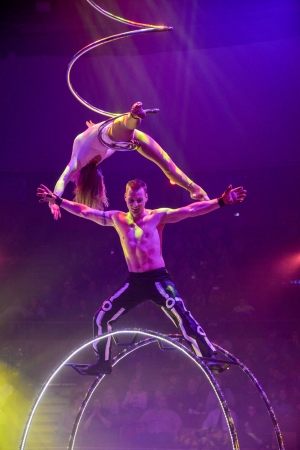 After being a professional gymnast for 15 years, Szilvia Pajor has decided on pursuing a career in acrobatics at the age of 21. After graduating from the Imre Baross Institute for Acrobatics in Budapest, Szilvia was initially performing for the audience of luxury cruise ships. Subsequently, she toured all over the world with her duo trapeze, hoop, aerial silk, and aerial spiral acts till 2014 when she was offered a role at the Friedrichstadt Palast show in Berlin. After performing for 2 years in Berlin she has come home, and her performance can finally be enjoyed by the audience of the Capital Circus of Budapest.

Balázs Földváry’s career began at the Institute for Acrobatics in Budapest where he learnt the art of acrobatics, dance, pantomime, and juggling. He has perfected his BMX bike skills with the help of his friends, after graduating from the Institute, he and his friends toured all over the world with their BMX bike and skipping rope number. Balázs went solo at the age of 24, apart from performing his BMX bike act, he created a Cyr wheel and German wheel act for himself as well. The audience has been amazed by his 3 acts since 2004. 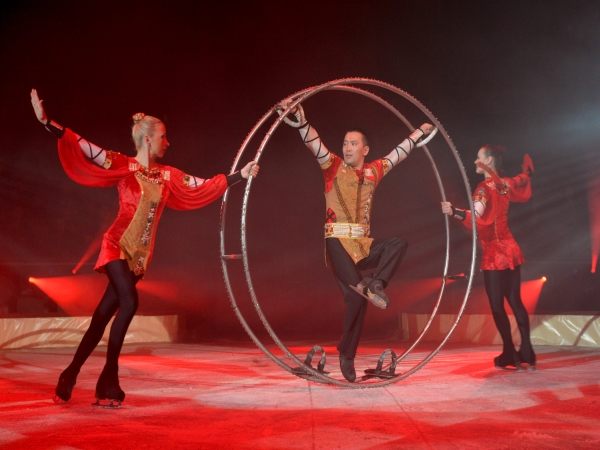 Transcendent forces will be called upon by the aero wheels moving to the rhythm of ancient drums, the spirited movement of the wheels will give rise to the vigour and dynamic at the ring. The impressive, synchronised team work of the six artists will take the audience’s breath away, the production has been performed for several years at the ring. Nikita is the newest member of the formation, who has learnt how to perform with the German wheel on ice. 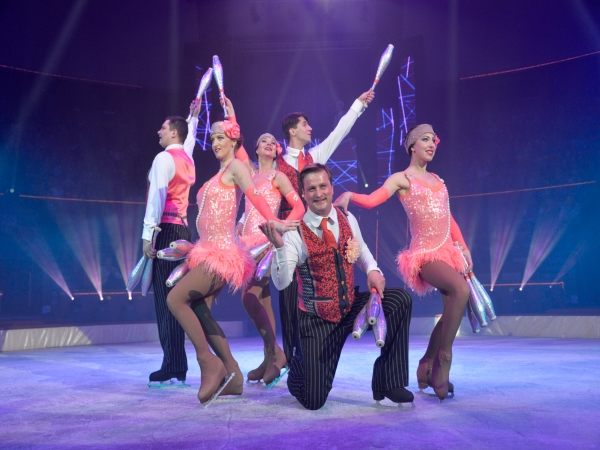 The six jugglers present a perfect teamwork at the ring in their act, which main characteristics are fluency and accuracy. Behind the aerial-like movements concentration and paying exceptional attention to each other plays a crucial role in their performance, the juggling clubs are spinning, flying and changing places in the air. 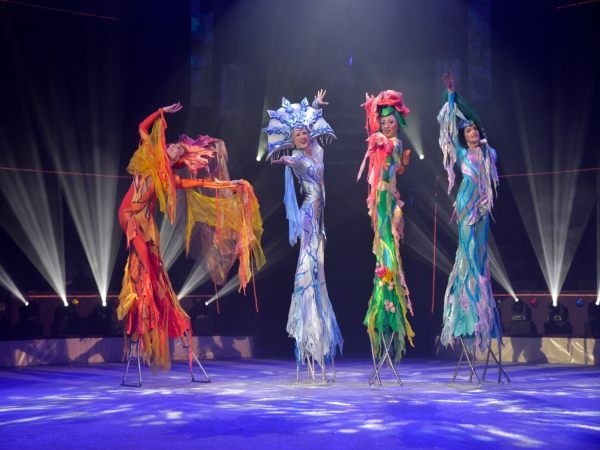 The dance of four seasons

Elegance, charm, and harmony take place at the ring when the seasons follow one another: winter, spring, summer, and autumn. Everyone will perform their magnificent dance number on the ice, which represent the harmony that derives from the eternal cycle of life. The majestic production will feature nearly one meter high ice skates, that makes the four artists’ performance more graceful and weightless. 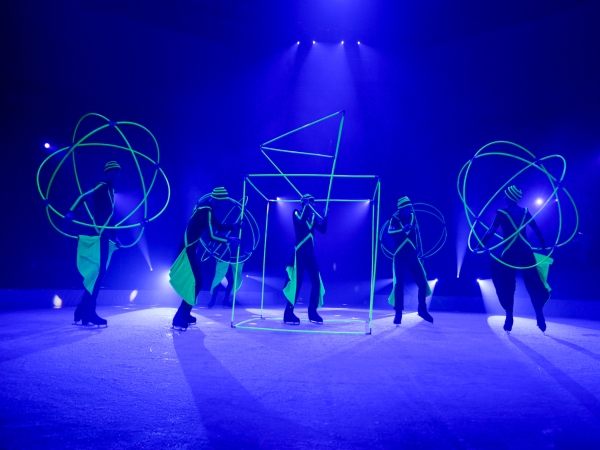 Ice dancing with the elements

The fluorescent geometric shapes will create a magical moment at the arena, which, just like planets, are rotating on their axis and around another. During the fascinating space journey the audience will see some spectacular pictures depicting different shapes, which will be created by the professional figure skaters. 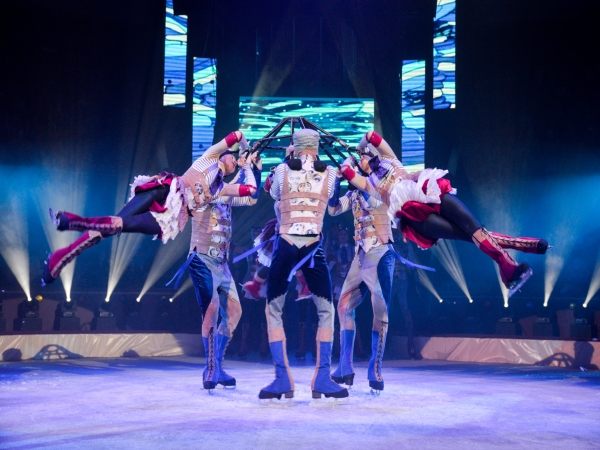 The troupe of the Nikulin Circus will perform their splendid ice dancing show at the end of the first part. One of the specialties of their production, apart from the chic and stylish costumes, is the equipment which will spin the four ladies, with this performance the group has created an impressive rotating act. 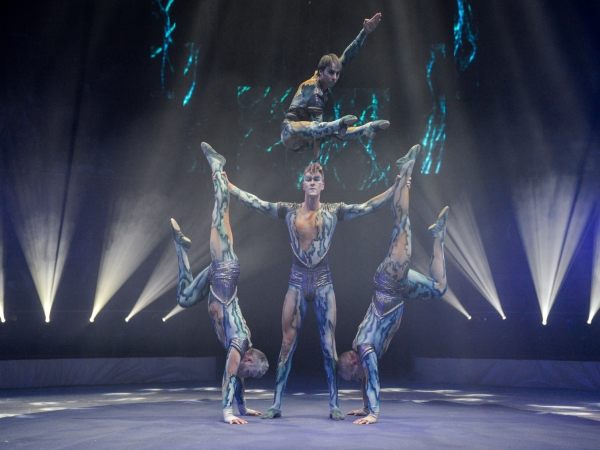 The Atlantis Acrobatic Group is famous for being the 4 master artists of body control and balance, the group will take the audience of the Capital Circus of Budapest into the world of fantasy. The formation was established in 2001, in their production utter concentration is paired with magical muscle work, owing to this fact their bodies melt into magnificent shapes. In the production of the exceptional talented artists imagination has no boundaries as dreams will come true. 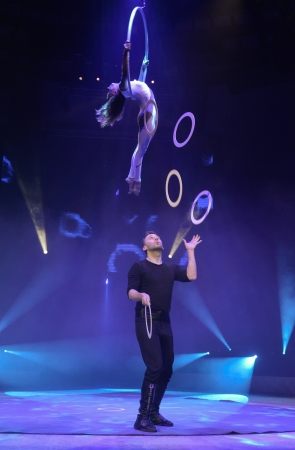 Laido Dittmár comes from a multigenerational Hungarian-Russian artist family, he made his debut at the ring when he was six years old. He gained professional experience in Russia as an invited guest of the Nikulin Circus in Moscow. As an award-winning juggler he has been performing in numerous countries worldwide. The famous Circus Sarasota in the United States said the following about the young artist: "He's quite possibly one of the greatest jugglers you will ever see.” By applying new ideas and techniques he has created a modern and fresh juggling style, he is passing on his experience, collected in the form of a book, to the next juggling generation.

Krisztina Vellai has become familiar with the magical world of circus as a lover of classical ballet and modern dance. At the Rippel Academy she managed to learn the basics of acrobatics, she has been working with a partner, as a solo artist, on the ground, in the air as well. In her acts she tends to place great emphasis on the plot, as she is a fan of a meaningful production, which can be presented to the audience. As of this April Krisztina and Laido together will amaze the audience in a unique act. The fascinating combination of the two genres has resulted in Synergy. In this symbiosis the parts form a whole. The hoop binds together, complement, and make it complete. This is a symbiosis where the storm of the inner and outer reality appears simultaneously. And it is going round and round and does not stop... 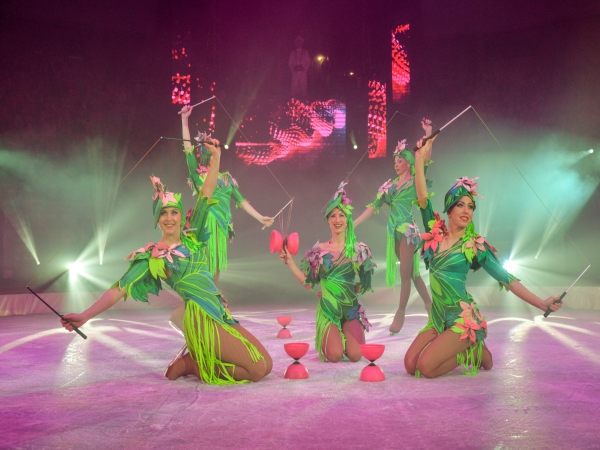 The diabolo is a juggling prop, which history traces back to more than 4000 years to China. According to the chronicle Napoleon himself was a huge fan of this game. Nowadays it is still popular within the alternative and classical circus arts as well. This widely beloved equipment becomes a means of expressing exhilaration, playfulness, and lightness in the production of the Moscow troupe. 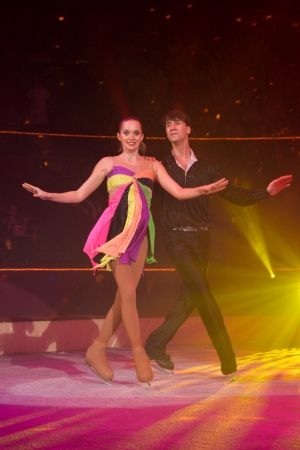 The eternal woman will come to life in Daria’s number at the rink. She will pose as a new person every second, as she changes clothes and style and reveal her diverse and colourful personality to the world. On the other hand, she always stays true to herself, we can admire her magical being in her graceful waltz, passionate tango, cheerful, dynamic rock and roll or hot Latin salsa performance. 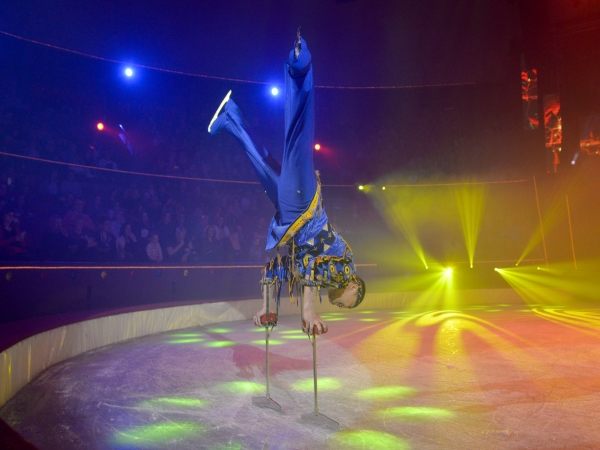 When the whole world turns around, when everything turns upside down, whoever can get by on the surface of the ice is truly a hero. Danzan Balzhinimaev perform his sensational acts while ice skating with his hands, which will amaze the audience without a doubt. In his thrilling production he will be ice skating with his hands and sliding while doing a handstand on the extremely slippery surface. 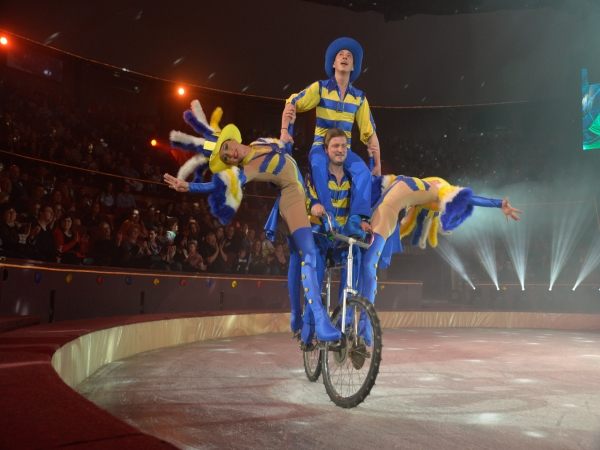 The masters of balance will captivate the audience at the arena in the production that features several performers, in which they are demonstrating their unicycle number while passionate jazz music plays in the background. The eight unicyclists will showcase, by a spectacular formation, that they are not only masters of the ice when they are wearing their ice skating boots. 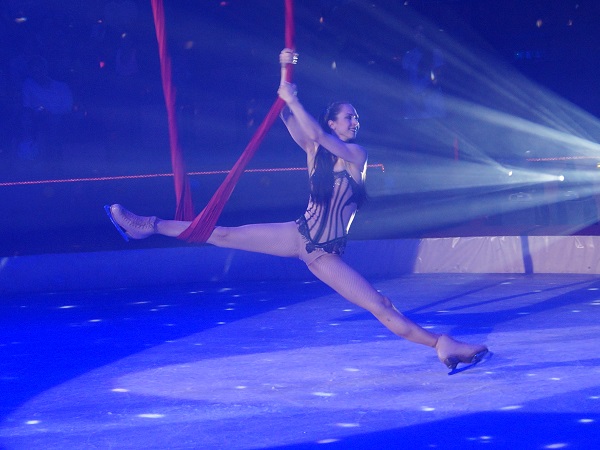 Magic on the ice

Olga performs her number with effortless ease on a special tool, that is a hammock. The audience will be bewitched by her aerial movements and captivated by her graceful femininity. She impresses in the air and enthral the audience while dancing on the ice rink. 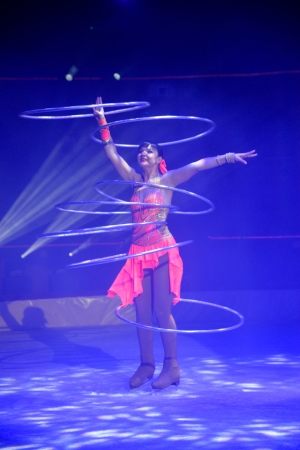 The first hula hoop championship was organised in America with 2000 participants in 1968. 12 years later 2 million contestant entered the competition. The hula hoop fever emerged in Western-Europe in 1983, hoop acts started to appear more and more at circus rings, which by the look of Viktoriia’s impressive presentation does not surprise us at all. 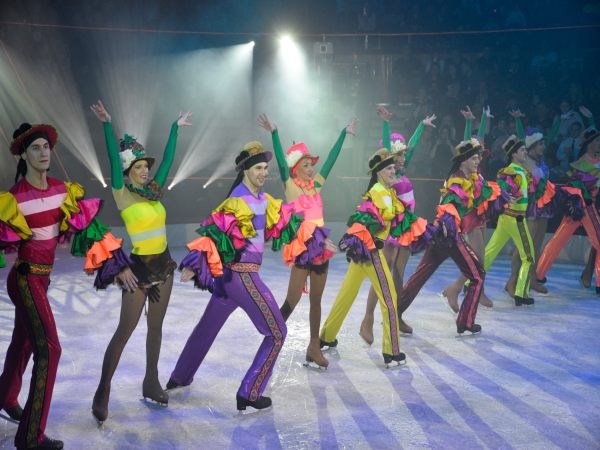 The group explodes onto the stage and will immediately create a carnival-like atmosphere at the rink. The fiery Latin music quasi encourages the audience to jump up and join the skipping ropers or at least start dancing the invigorating salsa. Because everyone loves the skipping rope. Even the ancient Egyptians and the Indigenous Australians loved it, to whom we can be thankful for this simple yet versatile tool. The temperamental production of the Nikulin Circus will guarantee the entertainment of all age groups in the audience. 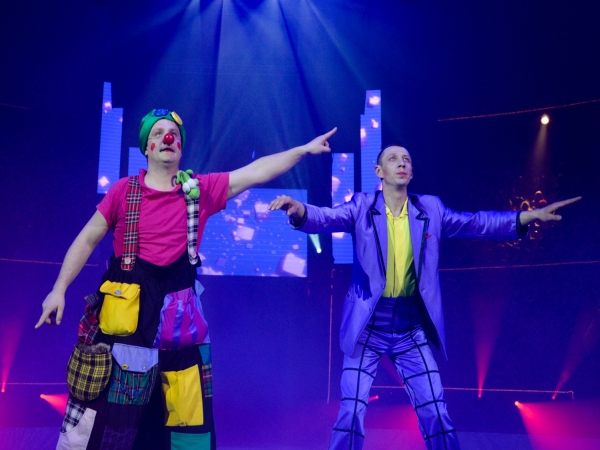 Clowns on the ice

The gleeful moments in the show are guaranteed by a well constructed production built on situation comedy by the clowns. While Dmitry and Kirill come from the world of figure skating, Andrei started to work at the circus on ice after graduating from the Institute for Circus Arts in Ekatyerinburg. Humour and blithe playfulness are the characteristics of their production.