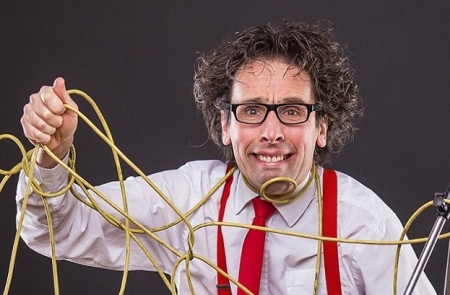 The adult clown class of the Baross Imre Institute of Artist Education has achieved outstanding success in the international Comediada Clown and Mime Festival of Odessa. The Tadam Group consisting of six pupils has won the award in “Best Director and Screenwriter category”. Csaba Méhes, one of their head teachers spoke about their experience in Odessa.

What shall we know about the Comediada Clown and Mime Festival? What production did the clown class perform?

In every year a wonderful clown festival is held in Odessa, the Comediada Clown and Mime Festival, where I won the Grand Prix Award two years ago. To my great pleasure I could attend with my solo performance last year, as a headline, and this year I was part of the jury. It occurred to János Greifenstein, other head teacher of the clown class, and me that it would be good, if our students could see this festival towards the end of their two-year training, gain experience, meet professionals and not the least they would participate in a contest. The organizers of the festival said yes to our proposal, that is how we got out with our six pupils, Sára Brunen, Natasa Kőhalmi, Artúr Dangel, Dávid Margulius, Jakab Sebestény and Levente Turóczi. We have created a twelve-minute long production with which we got into the competition.

The competition of the festival is viewed in the frame of two galas by the audience and the professional jury consisting of fifteen members of circus, theatre and festival directors, leaders of circus schools and academies, noted professionals all over the world. Eugene Chaplin, son of Charlie Chaplin also attended. Clowns, comedians and mimes from many countries of the world arrive to the festival. The jury decides after the gala shows, who deserves the awards. The most prestigious award is the Grand Prix which is given to the best production; besides that, they hand the Best Director and Screenwriter Award, the Best Trick Award, and the Best Performer Award. There is an Audience Sympathy Award which is given by the votes of the public.

It was not easy to decide, because we could see a lot of high quality and colourful productions. The first of April in Odessa is the Day of Clowns, when every citizen is outside of the street, and everybody wears a mask. The parade is held on the main street, which ends with a great stage, where the jury waits for the participants. That is where the awards are given.

Tadam Group won the Best Director and Screenwriter Award. The production is about six clowns. One of them wishes to present a magician production, but the others always thwart it, and they perform a production. However, at the end our hero also succeeds, and they become a team. It is a funny and kind story, which has a beautiful moral: it shows, how can be a company formed from people who previously had rivalries.

How the festival affected the pupils?

It was a fantastical experience for them, they could see a vast array of productions, which showed the broad spectrum of the clown profession. They got acquainted with professionals from different age groups, and all in all they learnt a lot on the festival. This is the crowning of their two-year clown training, since our students could not only show themselves, but they could see, how humour and mime works in other nations and artists.

They were really happy it came as a surprise to them. When the jury met, almost all of them thought the group deserved a prize, all of them were charmed by their appearance and stage presence. It is a great encouragement, endorsement for them, besides it is a presentable professional reference.

We have to thank the Capital Circus of Budapest and Baross Imre Institute of Artist Education, since despite János Greifenstein and me worked with the clown class, the artist teachers also had significant part in that the pupils achieved such a result. This is the success of both institutes.