The opening of the MITEM Festival will be held in the Capital Circus of Budapest on the 11th of April! 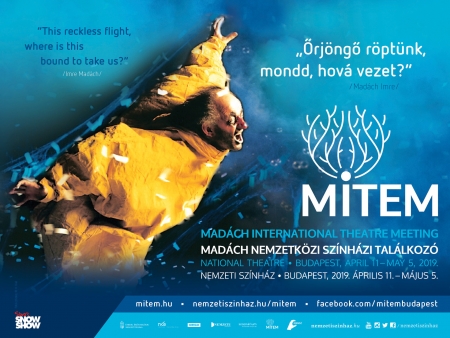 The opening of the Madách International Theatre Meeting will be held on the 11th of April, before the first Hungarian premiere of the SLAVA’S SNOWSHOW in the Capital Circus of Budapest. Before the show at the opening ceremony held at 19:00, Péter Fekete Minister of State for Culture, Attila Vidnyánszky, general director of the National Theatre, and Slava Polunin world-famous renowned clown will make a speech. In the opening the Mongol Circus Production will perform their sensational Hand Voltige on Ball production, with which they won the Golden Elephant Award of the International Circus Festival of Girona this year and the silver award of the 8th International Circus Festival of Bayeux! Besides that, Nelli Szűcs and the actor band of the National Theatre and the Capital Circus of Budapest will perform together a production, and the Anima Prizma popular fire juggler group of our previous show, the Phoenix - Circus of Fire, will also perform as well!

The MITEM Festival always looked pass the classic theatre genres, since dance, movement art and special performances are featured in the festival. That is why it always looks for new places and chooses spots according to the styles and needs of the performances. That is why this year the Madách International Theatre Meeting will start with the SLAVA’S SNOWSHOW in the Capital Circus of Budapest.

The festival will be held between the 11th of April and the 5th of May in Budapest, on which occasion one can see such plays, like Imre Madách’s Tragedy of Man, Tennessee Williams’ A Streetcar Named Desire, and Fyodor Mikhailovich Dostoevsky’s The Idiot.