Being a clown is a philosophy of life: We held the Hungarian premiere of SLAVA’S SNOWSHOW! 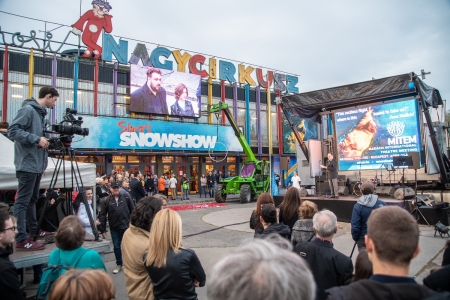 Today from 20:30 the hilarious show dreamed by Slava Polunin, SLAVA’S SNOWSHOW was featured for the first time in Hungary, in the circus floor of the Capital Circus of Budapest! All tickets were sold for the show weeks before the premier, so we installed a few more seats regarding the great interest. During the one and half hour long show the clowns made the audience the part of the show, and reacted to each of their reaction, with which they provided a merry entertainment, which featured sophisticated mime humour and overwhelming spectacle, like the snowstorm, fog and giant balls. The audience awarded the show with mirthful laugh and thunderous applause, they barely wanted to leave the auditorium!

With this show the VI. Madách International Theatre Meeting has started, which opening was held at 19:00 in front of the Capital Circus. Péter Fekete Minister of State for Culture, Attila Vidnyánszky, general director of the National Theatre, and Slava Polunin world-famous renowned clown made a speech in the opening ceremony. Péter Fekete brought a culture treasure to the audience from the Hungarian Museum of Science, Technology and Transport: the recorded interview of the noted mechanical engineer, physicist, mathematician, Theodore von Kármán which was made on his eightieth birthday. The opening was started with the wheel act of Lena Dolinskaya, which he performed on the music of the band of the National Theatre. The Anima Prizma fire juggler group who were featured in our previous show, the Phoenix – Circus of Fire, also performed in the event, and the Mongolian Circus Production, performers of our summer show, FlyingCircus also performed their rope skipping act. Besides that, Nelli Szűcs and the actor band of the National Theatre and the clown class of the Baross Imre Institute of Artist Education performed together a production.

During the opening, Péter Fekete, Anna Lakos, president of the Hungarian centre of the International Theatre Institute, and Dr. Misa Ragány, head of art department of the Cultural Secretary of Ministry for Human Resources, János Zalán, general director of Pesti Magyar Színház (Pest Hungarian Theatre) and János Novák, director of the Kolibri Theatre gave the Hevesi Sándor Award to Edit Kulcsár, dramaturg of National Theatre, organizer of the MITEM Festival, Iván Angelus, dance teacher and choreographer, and director István K. Szabó. After the opening Péter Fekete and Attila Vidnyánszky pulled up the flag of MITEM Festival together in front of the Capital Circus of Budapest.

SLAVA’S SNOWSHOW will be in the Capital Circus of Budapest until the 14th of April, for five more shows!