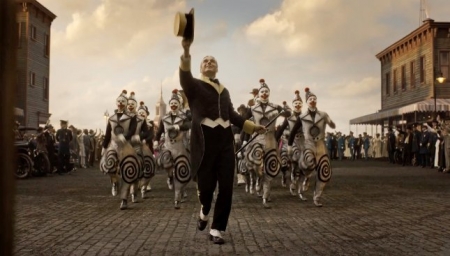 Our FlyingCircus show which premiered on the 20th of April was directed by the world-famous Kristian Kristof who was asked by Tim Burton to be the circus professional advisor and choreographer of Dumbo and also to direct the circus scenes of the movie. However, besides that Krisztián Kristóf is in the movie as well, since Burton was so satisfied with his work that he offered to appear in one of the scenes of Dumbo.

Of course, Kristian Kristof choreographed this scene by himself, during which he balanced his own hat.

“I focused on continuity – on being able to perform the exact same moves over and over and over again,” he shared. “The challenge that I had was actually to twirl and flick the hat in a very precise manner. So when I needed it, it would actually do a flip and land on my nose – and then to repeat that over and over at the same time, always at the same spot.”

Costume designer of the production, the four-times Oscar-winner Colleen Atwood designed the costume that he wore during the parade based on Kristian Kristof’s hat.

“He’s an amazing guy,” praised Atwood. “He speaks so many languages; he knows the circus world; he knows how to put a circus together. He was a great help to me and my department on this film, and I’m sure to everyone. We were really happy when he finally got to be the parade leader.”

After she learnt that during the scene Kristian Kristof wishes to wear his own hat, Atwood designed the whole costume around it, so his waistcoat and tailcoat had the yellow colour of the hat besides black. However, not only Atwood praised Kristian Kristof.

“He’s been around the circus all his life, and he’s been a performer all his life, so it’s in his blood” told Colin Farrell. “I remember one time we were sitting in The Colosseum set, and I was sitting around the outside ring with my back to the center of the circle, and Kristof was like, ‘We would never do that in the circus; you never sit with your back to the center of the ring’ And I was like, ‘Oh it is disrespectful?’ And he said, ‘Yeah, it’s just a thing,’ and then I got it. It’s in his DNA at this stage, and he has wrangled together a motley crew of the most incredible performers.”

“I was raised and born in the circus,” told Kristian Kristof. “My parents and grandparents, even their parents, were part of the circus. So it’s my home, it’s my life.”

The FlyingCircus inspired by the circus scenes of Dumbo is on show until the 8th of September in the Capital Circus of Budapest!

Source: Leah Gallo: The Art and Making of Dumbo