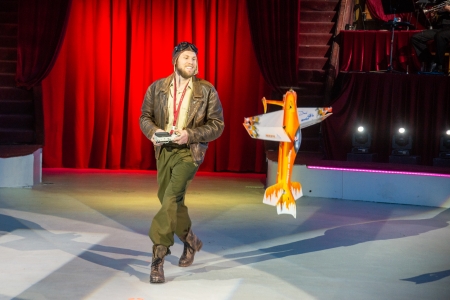 Daniel Golla has discovered his passion for flying Model Airplanes at the age of eight.

Now he performs with his unique Showpilot Act all around the world. He started to work in Circus Flic Flac, appeared in more than 2.000 shows at the most important circus venues, and was featured in many international TV shows. Since the 20th of April, he performs in our FlyingCircus summer show – now we talked with him about how he started to make his hobby for a real job, what is the secret of a good Airplane and how does he create such a unique show act that enchants millions!

What is your first memory or experience regarding flying?

My first memory is how I got my first plane for Christmas. I was really excited and wanted to make it fly.

But I direct crashed it in many small pieces at the first flight. I was still so fascinated from flying Airplanes, that I repaired it and tried it again and again. After a lot of more crashes I slowly get the feeling how I have to control the plane. My passion for flying planes became stronger and stronger, and I already dreamed became a good Pilot.

When did you build your first model and when have you started to perform stunts in front of others?

I build my first planes around twenty years ago, when I was 10 years old. I began to build my own planes because I wanted to have something unique that no one else has.

I also wanted to fly the best stunts which my planes could do better than all the other planes which you can buy.

I performed my first stunts directly behind the house of my parents. The more I flew the more experience and feeling I got every day, I became better and better, and people who walked nearby stopped and looked my tricks which I performed.

When did you decide that you would earn money with your hobby?

It was nine years ago. I began to work at Circus Flic Flac, and I saw how the audience reacted. It was not my real job at the beginning, it was only my second job, I am originally a mechatronic, a job which includes mechanics, electronics and informatics. However, I wanted to follow my passion. It was a really difficult and hard time in the beginning, because nobody wanted pay and book my Showact. People scared and did not know if my Show will be successful, but the audience loved it and I already imagined how I would travel the world with my Show and present the public something completely different that they would expect.

For two years, I did the model flying as my second job, but then my dream came alive – my Shows was so strong already that I decide to try it as my real job.

Why did you choose the world of circus? What does circus mean to you?

I like the nice atmosphere of the Circus. I began to work at Circus Flic Flac to practice, because at winter I always rented a sport hall for training, but it was really expensive, so I started to practice at Circus Flic Flac. The manager told me that I could perform before the show, when the people arrived, and I saw how they reacted to the show.

How does it feel to perform in the circus? What do you like about it?

I like to be close to the people, I like to make them participate in the show, to make them feel that they are part of the act, to see what you can do with the lights and all the technics inside of the circus, because when you are outside you do not have the possibility to create such a great show.

How does it like to fly in the circus floor of the Capital Circus of Budapest? What do you have to take into consideration regarding aerodynamics?

It is really difficult to fly inside, regardless of which building you perform in since you do not have time to think before you would crash into the wall. You cannot reconsider your decision one or two times. You have to decide, whether you fly right or left, and it is really difficult. It is a lot like parkour.

Which stunts is the hardest to perform and which stunt that you are proudest of?

It is not one trick that is hard – the hardest part is to make a complete show which fits perfectly to the effect and to the music. All the tricks are hard, but I try to make the tricks in combination with the music and the effects that I have in the show to give the best impression to the audience.

What is the secret of the good model building?

You have to find the perfect combination of weight and size for the plane so that you can make it fly in small locations and also perform good tricks as well. You have to find the middle ground. You cannot make it too small, because people want to see the model, but it cannot be too big either, because then you cannot perform good tricks in a small place.

How long does it take create a complete show?

Well, I started to create a show fifteen years ago, way before I started to perform nine years ago. I had to see, which effect, which stunt works well in the performance. However, every show is completely different for me, because I try to make the audience participate in the show. If the left side of the audience is more enthusiastic, then I will play a little bit more with them. I perform the stunts according to the reaction of the audience. All shows are improvisations.

What was your most favourite performance so far?

There are a lot of them, but maybe the most favourite performance was the one when I worked in Wien. There was a really big Live television show in Austria, about twelve or fifteen million people around the world watched it. The location was close to the airport. The thematic of the TV-show was about flying. I performed with my small plane between real big planes which hanging in this location.

What would you advise those who wish to work professionally as a model pilot?

I cannot give any direct instruction since we are all different, but my advice is that if you want to do something, it does not matter what kind of show we talk about, you have to do it with passion and all your heart.

What is your favourite film or book regarding aviation?

I really like Top Gun, but I try never get "addicted" too much to a movie. I want to make my own “movie” with the show that people never have seen before.

It´s good to take a movie idea or use music like Danger Zone from Top Gun for the Shows but I try to do it in another way and try to show something that is really different, really new.

My goal is that people would leave my show with forgetting all their worries and dream about flying. Everybody dreamt about flying when they were children, and I want to give them back that feeling. I want to share all my passion and I am really glad that I am part of this show. It is my first time in Budapest.

What made the biggest impression for you when you arrived in Budapest?

I really liked the circus building in middle of the great park with the lake, zoo and everything around. At the beginning it looked a little bit empty from inside, but now with all the lights on and the mirror ball and the live band it feels really good for me, I really like to work here in such a great show, with such a great , professional and lovely cast, it is like a "family".

Special thanks for Kristian Kristof for such a great, high class Show.