Professionalism and casual elegance – interview with the Trio Sárközi 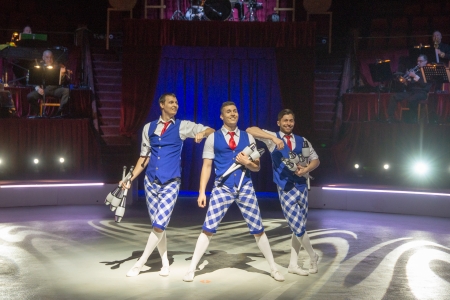 In the summer show of FlyingCircus Trio Sárközi – Péter Sárközi, Tamás Sárközi and Patrick Perecsenyi – represents the Hungarian circus art of great traditions as performers. We talked with them about their exciting productions, their love of circus art, their experience regarding the Capital Circus of Budapest, the current classic circus show and their future plans.

Why did you choose the artist profession?

Péter Sárközi: First my brother applied to the Baross Imre Institute of Artist Education, and then I followed him at the age of fourteen, because we wished to do some sporty stuff, but we did not want to do most of the traditional sports. We learnt all kind of circus art genre in the institute, but I liked the juggling the most, that is what interested me.

Tamás Sárközi: I used to do gymnastics, but since I grew up fast, they told me that I can never be a professional gymnast because of my height. That is why I sought for a career with my family in which I could make use of the knowledge I gained there. I applied to the institute at the age of twelve, where later I graduated in juggling and acrobatics with my brother and Patrick.

Patrik Perecsenyi: I started to learn juggling self-educated, because back at home my father entertained us with three oranges or balls, which impressed me a lot. I applied to the talent contest in the elementary school of Balatonfűzfő, where I juggled with three balls, balanced a chair on my head and stood on my hand. That is when I fell in love to the world of circus. My father made a wood wheel for me, I practiced with it as well and when we saw that the Baross Imre Institute of Artist Education enrolled students in Budapest, I applied.

During the first four years the artist novices have a taste from each genre, the teachers prepares them for specialization and then everybody continues their studies in the one they have the most talent for. I did not know the boys when I started my studies in the school, but when we got into the same group we started to practice together. That is how the trio started to form. For almost six years we perform together everywhere in the world, for example Scandinavian countries, Denmark, Saudi Arabia, Italy, England, Germany, Greece.

How do you feel yourselves in the Capital Circus of Budapest?

Patrik Perecsenyi: Very well, since we have not been home for a long time, and it feels great to perform in front of the Hungarian audience.

Péter Sárközi: We stayed in Greece for half a year and then we performed in many places in Europe during the winter season before the FlyingCircus show directed by Krisztián Kristóf. We were in abroad for eight months, but we became really homesick. It is good to be here at home with our family and make the Hungarian audience happy.

Tamás Sárközi: Besides these positive stuffs it is an honour to perform in this reputable institute with a rather good technicians and staff and a really homey atmosphere.

What is your opinion about the FlyingCircus show?

Patrik Perecsenyi: It is a real, high quality classic circus show for all ages which gives back the grandiose world of the early twentieth century circuses. The show is built on pure circus performances, so there is no need for laser show or the special technical solution. It puts a great emphasize on live music and the respect of the circus tradition. Such shows are nowadays quite rare, so I can tell it for all of us that is an honour to take part in them with our acrobatic juggler production into which we put the best of our knowledge.

On what basis did you put your production together?

Tamás Sárközi: at the beginning there was a base to which we add and that we furnish, so during the six years we perfected our acts. Our teachers helped us at the beginning that which trick we shall put next after the previous one, but we consider the production as our own, no choreographer helped during the creation. It was important to us that we make a dynamic, precise, spectacular production that nevertheless radiates casualty.

Who can become a good juggler?

Patrik Perecsenyi: You need patience and lot of practice.

Péter Sárközi: It is also important that she has great dedication, she shall love the circus and what she does. You cannot do it by necessity, you have to do it all by heart.

What are your plans after FlyingCircus?

Péter Sárközi: We will spend the winter season in Switzerland, and then next year we return to Greece in the summer season, where we will entertain the audience with a fifty minutes long show, which features acrobatics, juggling, dance and humour. It is a tad bit different than the audience can see here. Naturally, we will perform together in the future.