Try your best to capture the attention of the audience - Interview with Selenge Ulzii, member of the Mongolian Circus Production 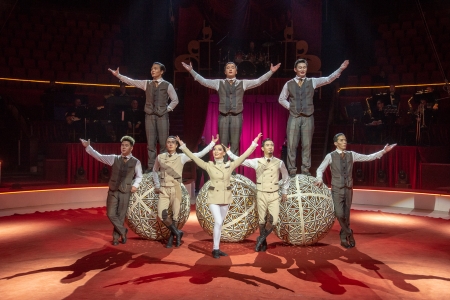 The Dream of the Marionette and the Mystery of Gentleman – two productions performed by the Mongolian Circus Production in our summer show FlyingCircus. The first is a rope skipping act, the second is a hand voltige on balls production. With their ball production, they won the Golden Elephant Award of the Elefant d'Or International Circus Festival of Girona 2019 and the Silver Award of the 8th International Circus Festival of Bayeux! Now we talked with one of their members, Selenge Ulzii.

You tell a story both with your ball and rope skipping productions. Where do you draw these ideas for the story?

Our producer, Erdene Nergui comes up with these ideas. We work with Dmitri Chernov, a Russian director from Nikulin Circus, and they discuss this stuff together, like what to wear, what shall be the music, and so on. Dmitri also brings dance teacher for us to learn the movements and also how the perform our roles. We are really grateful to both of them for all this and wish to thank for all they work.

Regarding our performance, as the only girl of the group – and also the one who plays the marionette – I try to do my best that all my colleagues in the group would receive the attention, because I know that I stand out. That is why I compliment them during the Mystery of Gentleman – the hand voltige on ball – production.

The dress and costumes are all from Moscow, the designer is Russian, but the tailors are Mongolian. We also play the two productions differently. In the Mystery of Gentleman, we have to act differently in order that each of our characters would have their own personality. In the skipping rope act I play a little doll who is dreaming and losing her hand strings during this process. We keep the audience in this different, dreamlike world with our performance.

Both productions include complex, difficult acts. How do you build your performances?

We have been working together with the ball act for one year. We started to work together in 2018 for this act. Otherwise we know each other for ten years – we studied in the Mongolian Circus School for five years together, and we have been working together for another five years. We are all friends. Last year we started to work on these two acts, the ball and rope skipping productions.

In the skipping rope act, there are not much hard tricks. The hand voltige on ball act, on the other hand, is really difficult, because you do not only stand on a ball, but hold your partner on your shoulder, who holds another partner on his shoulder. When we started practicing for our performance, we could not even stand on the ball. So we just held the ball and started to jump. It was really difficult.

We have performed the rope skipping act in Girona, Spain, on the festival this year January for the first time. We have been a team for ten years, since we started the school, we performed together, and it is a lot of time, if you think about it. Originally, we were friends, now we work as colleagues in these productions.

What is the hardest, most dangerous part of these productions?

While now we can perform it well, the hardest part was to practice everything regarding the ball act. We need to perform well on the balls. Currently the hardest part for my colleagues is to turn the ball when me and my partners jump, so they can catch us smoothly. There is no hard part for us regarding the rope skipping act, when we perform that, we all are in a flow together.

You won many awards with your productions during your previous performances. Which of your favourite from them?

For me, it was the Idol Festival of Moscow in 2018 September, because we performed our hand voltige on ball production for the very first time in public. This gave quite a different perspective; I have learnt a lot during this event, like how to perform better. It is a big place, and at the beginning sometimes some people from the audience kept looking their phones, and sometimes that felt bad, because we are there, we try to entertain them, and they still pay their attention elsewhere. But I have learnt there how to catch the attention of the members of such a big audience. While we did not win any awards there, it was still worth because of this lesson. It does not matter, where you perform, you have to try your best to capture their attention.

Could you tell us more about Mongolian circus art?

We have circus schools, where you spend five years for learning. During the first three years they teach you every circus genre, juggling, contortion, acrobatics, high wire, trapeze, everything. After those three years when we learnt everything, they will ask you, what you want to perform, then you will have to practice only that. If for example you would like to perform contortion, you can practice contortion – I did that for the last two years. I feel myself very lucky that I attended in this school.

I also have to say that we had the best teachers and coaches who taught us everything that we know, and we are really grateful for them. So we would like to thank everything to the institute of Khishigt Ganbold X-Mak Circus-21 for everything.

What was your first performance?

It was contortion, of course, but it was way before the circus school – I was ten or eleven. I went to South Korea and I performed there. It was not for a season, I did not have a contract and of course there were no awards either; I performed in an official musical festival. It was my first time to perform in another country.

What attracted you in the FlyingCircus show?

I like that it is a classic circus show, and the director, Kristian Kristof did his best to give the audience an unforgettable circus experience. He also told me that he was inspired by his experiences when he worked on Dumbo, and he captured the spirit of the old circus. And I am also grateful that we can perform with such great, talented artists. So, I think everyone shall come and visit FlyingCircus, because it is such a great, magnificent show.