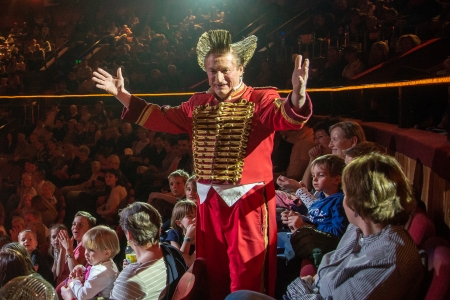 This is the first time, that the world-famous clown, Fumagalli performs in Hungary. He appears with his brother, Daris in our FlyingCircus show. Together they won the Golden Clown Award in the International Circus Festival of Monte-Carlo of 2015, after he won the Silver Clown Award in 2001. Now we talked with him about their characters, the secret of a good comical act and how circus changed during the years.

In your performances with your brother your character is the more comical, while Daris’ character is more serious. How do you share the roles between the two of you?

My character, Fumagalli, is the little man, who has big dreams and aspires to become an artist, and, in the end, he achieves it. My brother, Daris plays a serious man – or the straight man – who tries to put him in his place, tries to prove himself to be cleverer, but in the end, my character is the one who will come out as the cleverer guy.

You inherited the stage-name of Fumagalli from your father. What have you learnt from him regarding clown art, and what is in which you are on your own way?

The character’s name is quite famous in Italy as my father, Enrico Fumagalli was the clown of Fellini’s films. He did many films with Fellini; he was the star of the director’s clown films.

I have learnt pantomime from my father, because he was quite proficient in commedia dell’arte. All my family studied the famous comedian Dario Fo. He performed in the style of modern commedia dell’arte. I do a lot of slapsticks here, what you see in the show is only a small part what we do. We do two-hours shows – my brother and me – by ourselves, and we play different sketches and different acts with my sons together. We have an act called the Fumaboys.

Fumaboys consists of five guys dressed as tennis players who play with the springboards. In our role in that sketch we try to look like great artists, but we do not know anything. In this sketch we take participants from the audience to jump from our springboard.

In this act everybody has different role. This is a comedy act – it is not an entrée, like Little bee. It is a straight comedy. Everybody has his own character with big moustache. It is a completely different thing, like when I play the maestro in the FlyingCircus show. In that case I want to become the leader of the circus band. Then I screw up everything, and then they throw me out. I am only a small working class guy there. Then I come back again in the slow motion fighting act. And in the end, we perform the Little bee. In that performance I throw the water to the face of my brother’s character to show him that I am cleverer than him. It is sort of a wish-fulfilment.

Before you performed as clowns, you had performed a tight-wire act as the members of Feller Boys. Could you talk about your earlier circus career?

We used to do many things in the old days, when we were young. In our time we had many different acts. We used to do trampoline, flying trapeze, the wire, teeterboard, handstand, so we did a lot of stuff. Not like today, when they only perform one kind of act. In the old days you had to be proficient in all. If somebody hurt himself, we used to replace him. It was completely different back then.

You perform four clown acts in our FlyingCircus show. Could you tell us more about the creation of these acts?

All of them – like the Little bee – are old sketches. They are more than two hundred years old. They used to teach them in schools in the old days, before we were even born. However, nobody performs them anymore. So, we brought them back again. All what we do has been brought back from the old times. 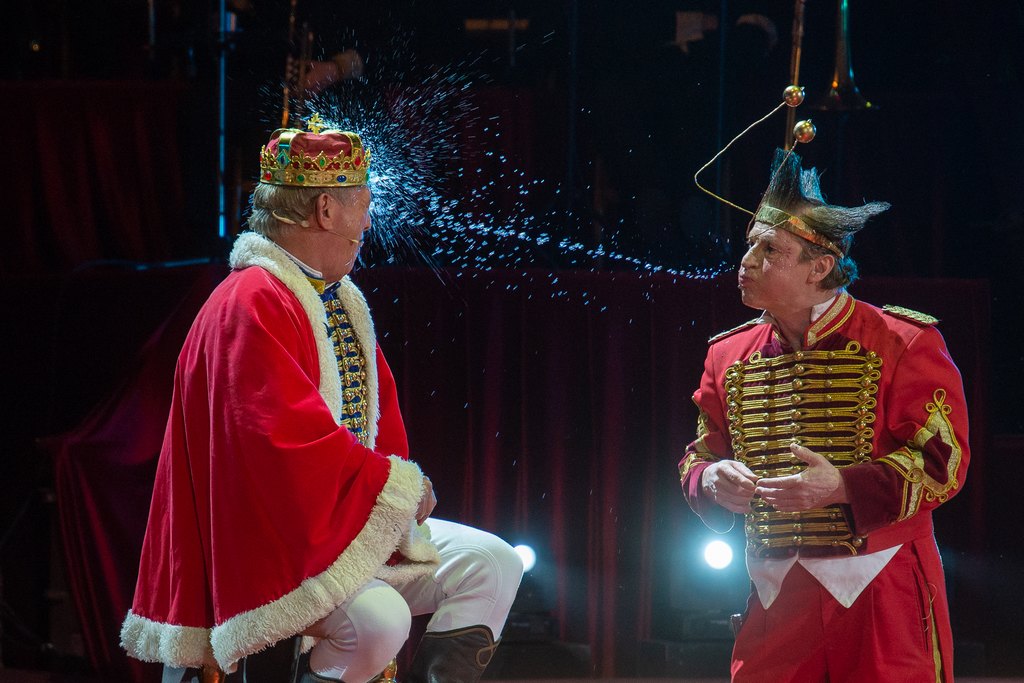 When I play Fumagalli, I am a different person. Outside of the circus floor, I am Giovanni, when I am work in there, I am Fumagalli. I switch completely. This comes from years of experience. It is not easy; it is a difficult procedure. Comedy is the most difficult thing that you can do in the circus – to be a really good comedian. Because you always have to learn, the more you perform, the better you become.

It is not enough to put a red nose and a bit of make-up to become a good clown. You must have it inside. You have to born with this gift inside you. It is like in the case of actors. You have really good actors and mediocre actors. The good actors have the acting in the blood.

How shall a clown relate to the other part of the show?

We, my brothers and me, are not clowns, actually. In the original language, clown is with the white make-up and costume. We are the Dummer August. They are two completely different things. Comedy in the circus is way more colourful and diverse. For example, you have people who tell story with movements, they are the mimes. It is really important to differentiate them and not to mix them.

How many of this is about preparation and how many is about improvisation?

Most of what we do is improvisation, because I have worked with my brother for so many years and we know each other. So, if I do something differently, he will know that immediately, and he will respond automatically to that. If I would do it to another person, he would not know, what is going on. He would be like a deer in the headlight. My brother has quite an important role. He is the one who sells me to the people. The better he is during the show the better I become in the circus floor.

It is important to work with each other smoothly so the act would be exponentially better. Timing is also very important, so the audience would not be bored. You also shall not overact it. 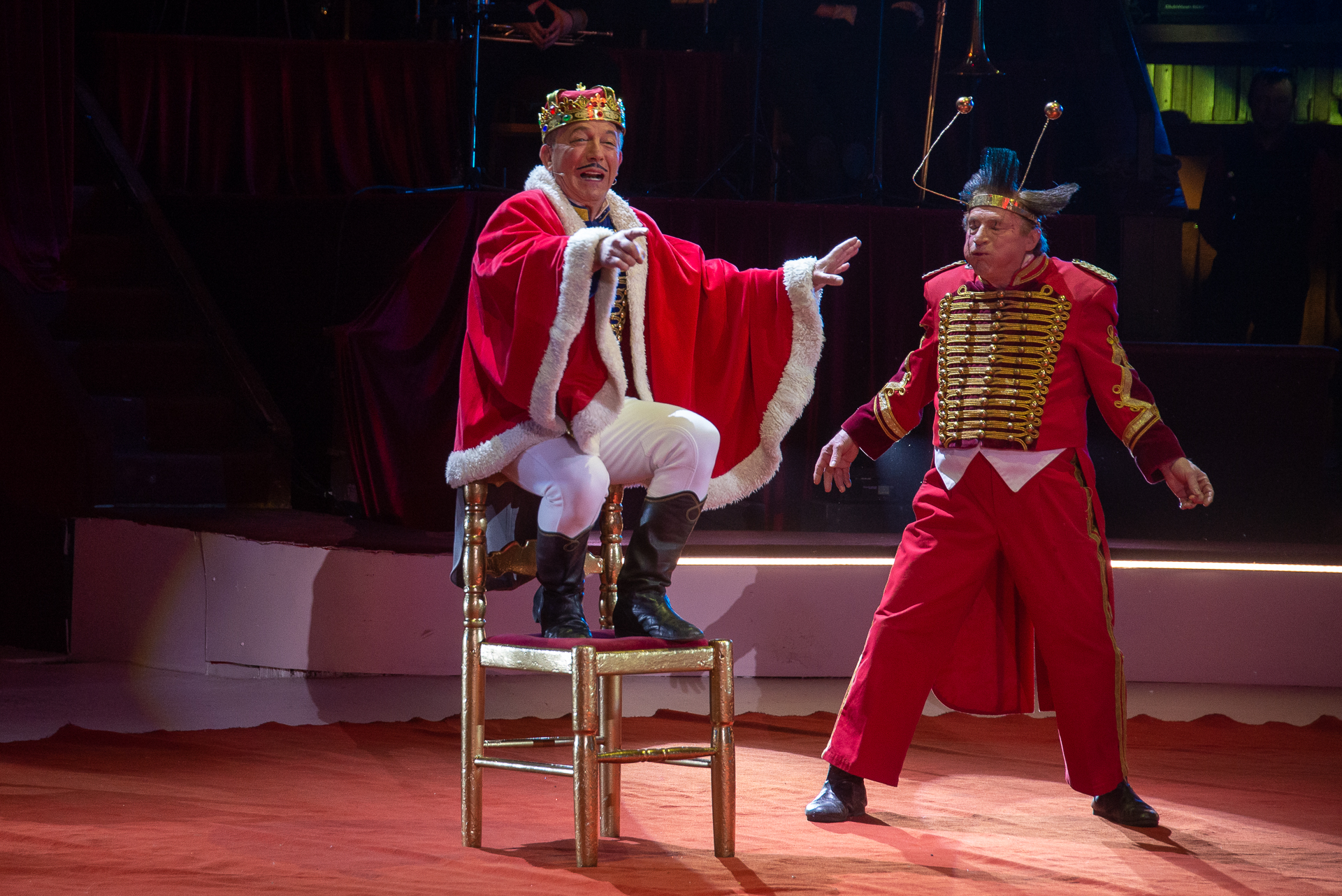 How has expectations changed for the circus comedian profession during the years?

In the older days, it was much better comedy than today. In the old days, you had really good teachers who really wanted to give people the best and teach the basics. You also have to know, that from a hundred people there might be only one who is good for this profession. You can see it in the eyes of the person, whether he has the talent.

How has circus changed during the years?

The circus in the old days, when I was young, had fantastic programs. Today, not all the circuses manage to have that. Like in Italy, where many years ago had fantastic shows. Today, only a few have, because people don’t want to go to the circus and the director don’t have the money to pay very good artists, so he has to employ mediocre ones. There are also not that many good acts like it was in the old days.

I remember, when I was young there were fantastic Hungarian artists. Forty years ago, you had the best jockeys from Hungary, you had the best teeterboard acts from Hungary. Jugglers, like Fudi, aerialists, like István Kristóf who performed with the Hunor group, József "Szöcske" Szilágyi, with the horseback act, dressed like a Mongolian – he was an incredible artist.

Today you do not see this kind of commitment in circus, because this profession needs hard work and good teachers. Like the Donners, they were amazing, the best artists on horseback.

Which is your favourite one from your previous performances and why?

Well, generally I have great success when I was a young acrobat, because we had the best wire act, there were no production like this. Nobody could do what we used to do. It is the same now with our comedian act. You can count in one hand the best comedians in the field. So, I like all my performances.

However, one stands out – my favourite performance was in the International Circus Festival of Monte-Carlo. I have won twice in Monte-Carlo. This is a big achievement for clowns because only a couple of clowns won nowadays in Monte-Carlo. You can count in one hand how many won a Silver Award.

What attracted you in the FlyingCircus show?

And it is a great experience, I love it and would do it again. I have a great time here. There are really nice, helpful people working here. If you have a problem or need something, they will help you. Krisztián Kristóf is fantastic and I am very happy to be here.