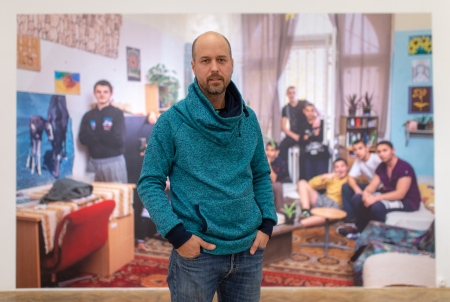 Today is the day of Hungarian photography, and for this occasion we talked with Adam Urban, Balogh Rudolf Award-winner photographer who captured the events of the Capital Circus of Budapest. He can show-up many professional awards, individual and group exhibitions, publications, photo albums while he chose photographing the events, shows and behind the scenes life of the Capital Circus and the virtuous documentation.

How did You get into contact with the world of circus and how did You become the photographer of the Capital Circus?

I started to create photos during my high school years, in 1994-1995, then I got into contact with the world of circus in 2009. Until that point I thought that I would only make advertisement and fashion photos, but I had to realize that I would not create everlasting values with those photos, so around 2008 the idea started to conceive that I have to find a topic with which I can work with in the long run. Then I came to the Capital Circus with the kids of my friend, and as a curious journalist, I continuously tried to look behind the curtains. That was where the idea came that what if I could enter there and would show the hidden world of the circus to the audience.

First, I asked for entrance to the Circus Art Studio, where, I got to know the artists practicing there while I took photos about them. There was a juggler, who, as I later found out, was Kristian Kristof, son of the then-director, so it was easy to enter to the Capital Circus with his help. It is a very closed world, and in the first time period the workers were not really fond of my presence, because I always got in their way and I did not know where to stand in the great hustle and bustle. So, at first, I had to watch more where I could be than what I could capture with my camera. Later I got to know the written and unwritten rules, so I could work smoothly with the artists and the crew. The world of circus is like a family, where, if you are part of it, you will be treated like a fully equal partner.

Why is your work important for the future?

It is very exciting to take photos in the amusement area of the City Park which currently faces big changes. The Fun-Fair had been closed and its area is used by the Budapest Zoo, and it has been a public knowledge for long that they will also get the area of the Capital Circus as well. Furthermore, the current place is too small for the planned expansion, and that is why we have to move.

Capital Circus raise many memories inside me as well, so, among others, that is why I wished to show this world in a different aspect, that with what difficulties they create the productions just to perform those acts for a few minutes in the circus floor.

130 Years of the Capital Circus exhibition is currently on display in the public area of the building, in which a lot of my photos from the last ten years were used to present and compare the circus productions of the last hundred years with the current ones. I already feel that my work paid off. I do not do this for the money anyway, it is not my daytime job either, but there was an urge to capture the values one can find here for the future generations.

It is a very extraordinary art, which I gladly record and document. While there are hundreds of theatres in this country, there is only one stone circus working within a professional framework – moreover, in Central Europe as well – and that is the Capital Circus. I can capture a lot of extraordinary performances which can inspire all of us.

Besides that, you also document the events related to the Capital Circus…

Yes, four years ago the then-management asked me to document the events for not only myself, but for the circus as well. Besides that, I create the photos for the magazine, they also use my photos for the posters, and my photos are published in the social media of the institutes.

Besides that, your photos show the everyday life of the artists…

If you have time to work on a topic, then you will get to know all those who work in this field and you will also get close to them. I think it is not only interesting for me, but for others as well to get insight not only into the long preparing periods, but to the private life of the artists as well.

Moreover, the interviews start with your portrait photos in the Miraculous People of Circus – Interview with Circus Artist volumes showcasing old artists, created by the commission of the Capital Circus…

When the creation of these volumes were conceived, I thought up an extra for the photo series, with which I could make the photos more interesting – with asking the old artists to put up their old costumes so I could make photos of them inside their homes. With this we have created an interesting contrast between their current life and their memories. With these photos I won the third place in the 36th Hungarian Press Photo Competition in Human Portrait category.

What kind of technical equipment you work with in the Capital Circus of Budapest?

I use such zoom optics in the circus floor with which I can create totals, but I could make them telephotographic with one move, and I can photo one detail from the production. Usually in this case I have an optic from 24 to 105 millimetres in my camera. In the backside I need optics with great brightness, because it is like making photos in candlelight, that is why I use optics with 1,4 brightness.

Which inspires you and what do you captures during a behind the scenes photo series?

During the last four years the routine became that first I take photos about the production during the rehearsals, when I observe from where and which angle would it be good to take photos. I could use these experiences when the new show premieres, when I make photos with the audience in the background. Then my favourite time period comes when I can go behind the curtains and observe the show from that angle which the audience cannot see. During the first few occasions I do not make photos, just observe, what happens, because these things will repeat. The artists will prepare and warm up according to the way their production demand, they show a completely different side than when they perform. It is a really exciting hustle and bustle behind the scenes. I instinctively try to capture as many symbolic stuffs as I can. For example, those moments are interesting, when the artists come outside after the productions, who smile in the circus floor, but you can see them tired behind the curtain. I try to capture a lot of human moment.

It is obvious that the world of circus totally captured you. What are your plans regarding the future?

It will be interesting, when the National Circus Arts Centre will be built so we have to leave this building, of which last ten-twelve years I made a serious documentation about. That is why I hope that one day the posterity will be able to read in the form of the book, with which they can get an insight of the everyday of the circus in the City Park by flipping through it. And if everything is fine, I hope that I can be the one who documents the multi-layered work in the world-class National Circus Arts Centre with my photos.