FlyingCircus bid its farewell to the audience of the Capital Circus of Budapest with flowers and all tickets sold! 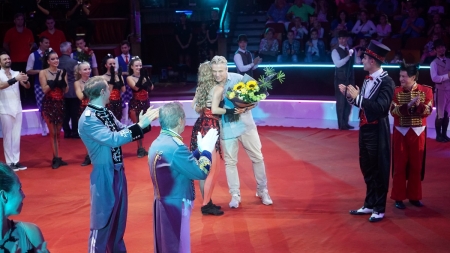 The summer has ended, and so has ended our FlyingCircus show! We have held our last show today at 15:00 in the circus floor of the Capital Circus of Budapest. The show directed by the world famous Kristian Kristof brought back the carefree circus world of our childhood to the manege, in which the audience could see the mixture of wonder, miracle and fantasy coming to life. On the last weeks all tickets were sold for many shows as a lot of people were interested in the show evoking childhood memories and the atmospheres of the old circus shows.

However, now the FlyingCircus bid its farewell to the audience of the Capital Circus of Budapest, and with it the artists who performed in the show also said their goodbye to our circus floor. We thanked their work with flowers and wild applause and wishes the best luck for them for the future!

There will be an intermission during the next month, after that on the 12th of October we will evoke the wonderful fairy tale world of the faraway, frozen Yakutia with our magical Christmas show, Snow Dream - Ancient Circus Dream, which will be for all ages!

We would like to thank everyone for seeing our show!