Did you know? – Yakutia, land of the ice 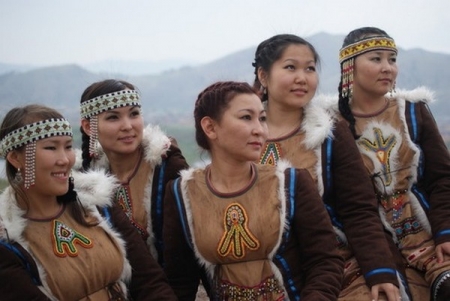 The Christmas show of the Capital Circus of Budapest will feature the magnificent productions of Yakut artists. The Snow Dream – Ancient Circus Dream show will premiere on the 12th of October. But who are the Yakuts, where they live and what cultural heritage they have? Come along with us in an exciting adventure in which we get to know the faraway northern land of Yakutia! In the first part of our article series we give you a glimpse of this vast wilderness and its inhabitants.

Yakutia, or officially known as Sakha Republic, was proclaimed on the 27th of April 1922 and is the part of the Russian Federation, the largest subnational governing body by area in the world. However, the history of the 964 000 inhabitants who live in the area of 3,083,523 square kilometres reaches far back to the past. Bordered by the Arctic Ocean – mainly the Laptev Sea and Eastern Siberian Sea – on the north, the area is inhabited mostly (45,54%) by the Yakuts whose ancestors were both Mongolians and Turks and speak the Turkic language known as Sakha. They migrated from Central Asia to the north in the 13th century – that is why their features have Mongoloid characteristics – and after they vanquished the indigenous local people, they settled in Yakutia stretching through three time zones and four geographical zones, rich in standing and running waters, covered by the taiga that is partially coniferous forests, partially lands covered by ice.

The Yakuts live in inimically harsh weather conditions, since there can be a 76 degrees difference in Celsius between the short summer and the dark winter that can last up to nine months, the lowest temperature in winter can be minus 67 degree in Celsius.

While they have been converted to the Russian Orthodox Christianity, they still retained the roots of their shamanistic worldviews. The Yakuts faithfully preserve their culture, which includes the traditional costumes, dance, folk music and the olonkho which includes the collection of the epic traditions and concrete works as well.

The poems performed by folk singers, the minstrels (olonkhusts) usually consists of ten to fifteen thousand verses. Recognizing their values, the UNESCO included them in the list of intangible cultural heritages in 2008.

First those groups started to work in agriculture in the end of the 19th century who were banished from the Russian Empire. Even though the majority lives in cities and villages, others disregard modernization and, like their ancestors, live in yurts as nomad livestock farmers. Those who live in the North drive reindeer herds, while those who live south breed horses and cattle, but a significant part of them work as fishers, fur merchants and mammoth bone merchants.

Even though Yakutia is known from its ever-lasting winter and uncharted wildernesses, one cannot consider it as a backwater area in cultures, since besides preserving their valuable and diverse traditions the residents can study modern sciences. For example, in the capital city of the governing area, Yakuts, which was built on the shore of Lena – and first, in 1632 consisted of an ostrog and houses fortified with wood planks, nowadays it consist of concrete building – features many universities for those who are thirsty for knowledge.

From this beautiful country full of extremities bring the Yakut artists their unique culture laced with tales, excitement and beauty, which they present with the help of circus art for the first time in Hungary, in the Capital Circus of Budapest. Besides their outstanding artist skills, they will present the wonders of the wonders of the everlasting winter in a world class performance, with unique costumes and music in a true Christmas show.