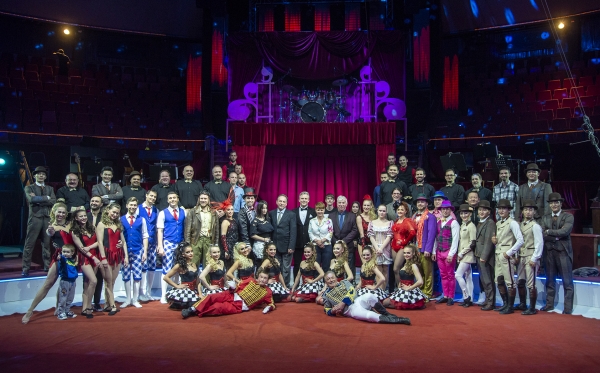 FlyingCircus directed by the internationally famous, multiple festival award winner, Hortobágyi Károly Award and Guinness Record-holder Hungarian artist, Krisztián Kristóf debuted with thunderous applause and all tickets sold! The show evoked the magical and grandiose world of the circuses that existed one hundred years ago and astonished adult and child alike!

We hold the premiere of FlyingCircus today, on World Circus Day!

We held the premiere of our summer show, FlyingCircus today at 19:00. The show is directed by the world-famous gentleman juggler, Krisztián Kristóf. Our show FlyingCircus will evoke the magical world of the circus that existed one hundred years ago with its atmosphere. Krisztián Kristóf was the circus professional adviser and choreographer of Tim Burton’s Dumbo, as well the director of the circus scenes, and he wishes to bring that experience and the grandiose golden age of the circuses visualized in the film to the circus of floor of the Capital Circus of Budapest.

Behind the scenes - SLAVA'S SNOWSHOW 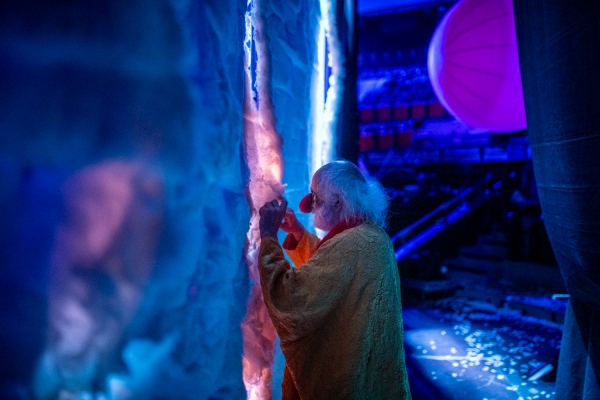 What does a clown think before he enters the circus floor? Who is behind the painted face and the red nose? How does he prepare for the performance? Adam Urban has given glimpses for years behind the curtain of the Capital Circus of Budapest with his brilliant photos - now he guides us through behind the scenes of SLAVA'S SNOWSHOW! 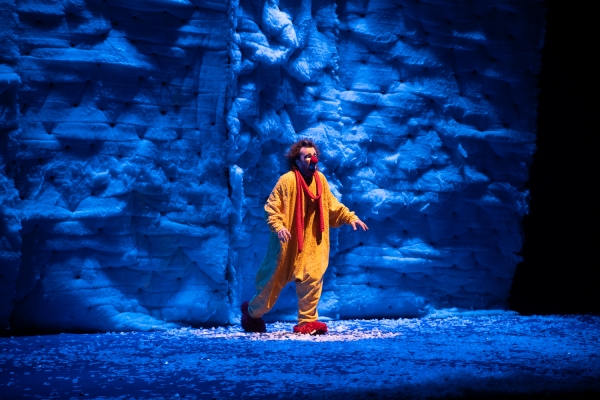 The world-famous company of SLAVA’S SNOWSHOW bid their farewell to the Capital Circus with their performance started today at 20:30. SLAVA’S SNOWSHOW was performed for the first time in Hungary! The spectacular show dreamed by clown legend Slava Polunin arrived in Hungary at the invitation of Attila Vidnyánszky, General Director of the National Theatre and Péter Fekete, Minister of State for Culture so that the VI. MITEM Festival would start with this performance.

Being a clown is a philosophy of life: We held the Hungarian premiere of SLAVA’S SNOWSHOW! 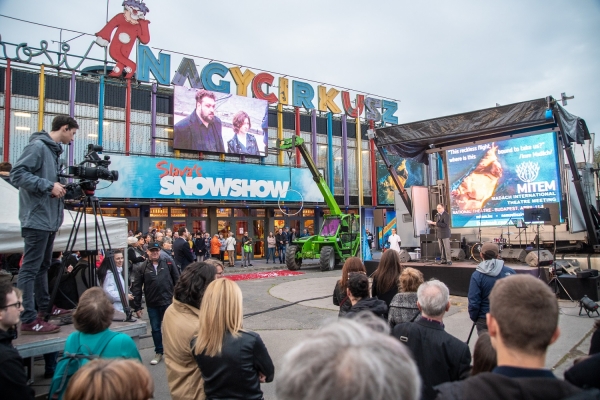 Today from 20:30 the hilarious show dreamed by Slava Polunin, SLAVA’S SNOWSHOW was featured for the first time in Hungary, in the circus floor of the Capital Circus of Budapest! All tickets were sold for the show weeks before the premier, so we installed a few more seats regarding the great interest. During the one and half hour long show the clowns made the audience the part of the show, and reacted to each of their reaction, with which they provided a merry entertainment, which featured sophisticated mime humour and overwhelming spectacle, like the snowstorm, fog and giant balls. The audience awarded the show with mirthful laugh and thunderous applause, they barely wanted to leave the auditorium!

The world-famous Slava Polunin, creator of SLAVA’S SNOWSHOW has arrived in Hungary! 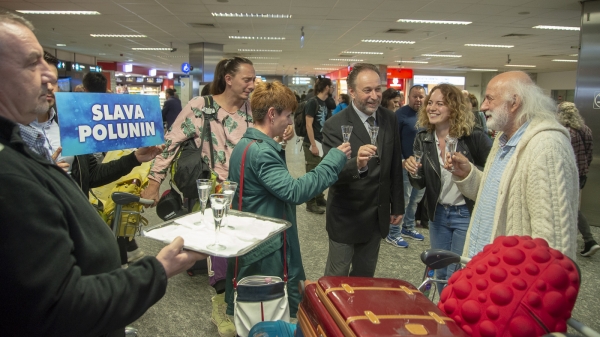 Today at 18:05 Slava Polunin, creator of multiple-award-winner SLAVA’S SNOWSHOW production has arrived at the Budapest Ferenc Liszt International Airport - the production will be presented between the 11th and 14th of April in the Capital Circus of Budapest, for the first time in Hungary! The clown legend was welcomed by Péter Fekete Minister for State for Culture, who, with Attila Vidnyánszky, General Director of National Theatre, has invited the company to Hungary, so the MITEM Festival would be opened with their performance!

The Mongolian Circus Production has arrived at the Capital Circus of Budapest! 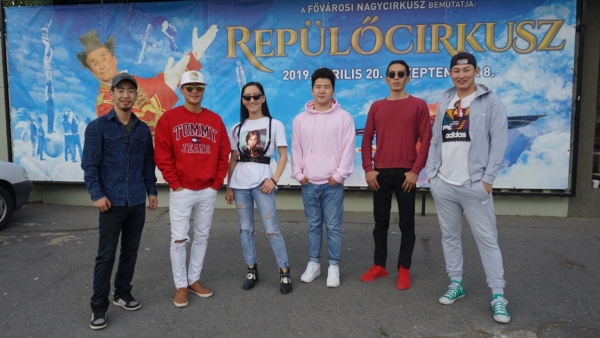 The Mongolian Circus Production performing in our FlyingCircus show premiering on the 20th of April has already arrived at the Capital Circus of Budapest! The company performs two productions, one is a rope skipping act, the other is a Hand Voltige on Ball production, with which they have won the Golden Elephant Award of the International Circus Festival of Elephant d’Or and the Silver Award of the International Circus Festival of Bayeux! Since the requisites of the group has arrived already, they can soon practice in the circus floor!

The opening of the MITEM Festival will be held in the Capital Circus of Budapest on the 11th of April! 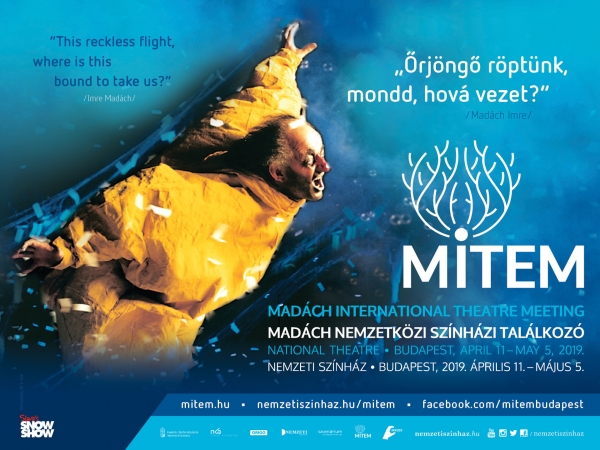 The opening of the Madách International Theatre Meeting will be held on the 11th of April, before the first Hungarian premiere of the SLAVA’S SNOWSHOW in the Capital Circus of Budapest. Before the show at the opening ceremony held at 19:00, Péter Fekete Minister of State for Culture, Attila Vidnyánszky, general director of the National Theatre, and Slava Polunin world-famous renowned clown will make a speech. In the opening the Mongol Circus Production will perform their sensational Hand Voltige on Ball production, with which they won the Golden Elephant Award of the International Circus Festival of Girona this year and the silver award of the 8th International Circus Festival of Bayeux! Besides that, Nelli Szűcs and the actor band of the National Theatre and the Capital Circus of Budapest will perform together a production, and the Anima Prizma popular fire juggler group of our previous show, the Phoenix - Circus of Fire, will also perform as well! 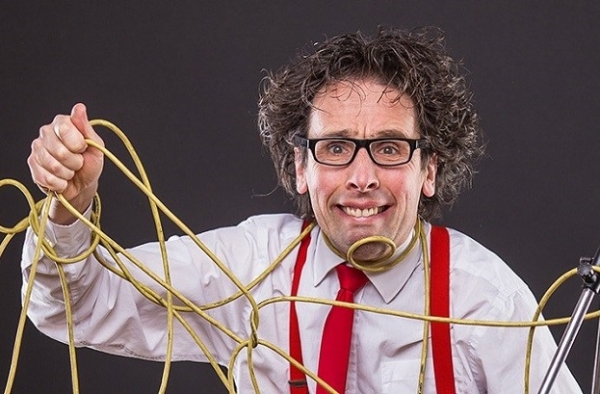 The adult clown class of the Baross Imre Institute of Artist Education has achieved outstanding success in the international Comediada Clown and Mime Festival of Odessa. The Tadam Group consisting of six pupils has won the award in “Best Director and Screenwriter category”. Csaba Méhes, one of their head teachers spoke about their experience in Odessa.

A new Hungarian success in the Comediada Clown and Mime Festival of Odessa! 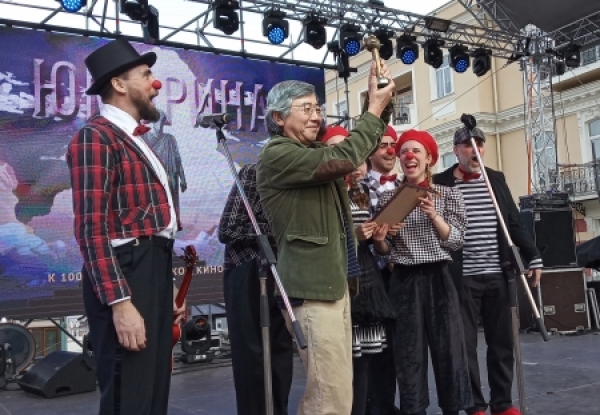 The „Tadam” production of the clown class of Baross Imre Institute of Artist Education was awarded in the Best Director and Screenwriter category by the international jury!

The unique production of the Mongolian Circus Production has won another award! 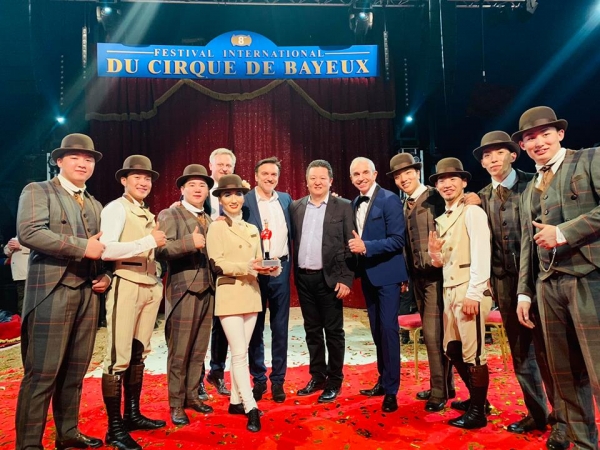 The Mongolian Circus Production won a Silver Award on the 8th International Circus Festival of Bayeux held between the 27th and 31st of March – they will perform this production in our FlyingCircus show premiering on the 20th of April! This magnificent production has won the Golden Elephant Award pf the Elephant d’Or Circus Festival of Girona 2019, and now it was acclaimed in another international circus festival! We wish to congratulate to the Mongolian Circus Production for this outstanding success!

From the 20th of April, You can also see this fantastic production with Your own eyes in the Capital Circus of Budapest!

The Tadam Group in the Comediada Clown and Mime Festival of Odessa! 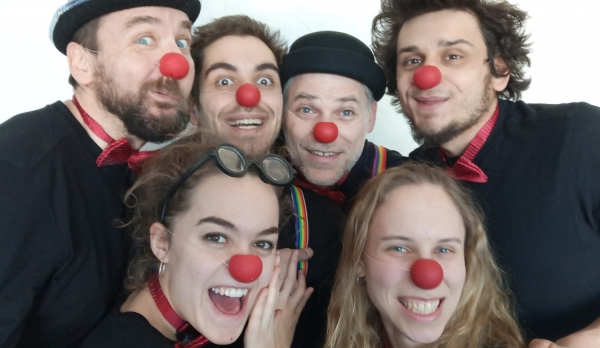 The Grand Prix Award-winner Csaba Méhes and the six member group of the Adult Clown Training of the Baross Imre Institute of Artist Education, the Tadam Group arrived at Odessa for the Comediada Clown and Mime Festival on the 27th of March, Wednesday evening. The group will take part in the festival with a twelve-minute-long production, which will be evaluated by a jury of fifteen members.

The dance rehearsals of FlyingCircus has started 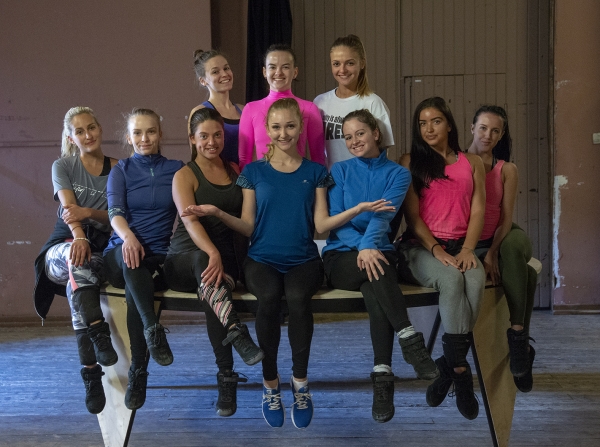 The rehearsal of the ten professional dancers of the Capital Circus of Budapest for the FlyingCircus classic circus show directed by Kristian Kristof and premiering on the 20th of April has started.

Circus Art in the Hungarian premiere of Dumbo 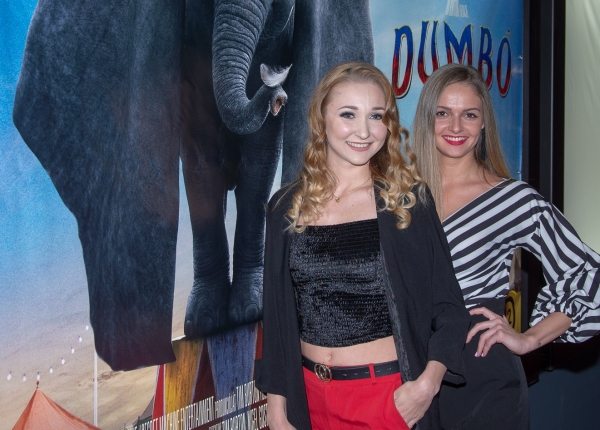 Yesterday, on the 26th of March, at 18:00 the Hungarian premiere of Tim Burton’s Dumbo was held in the Arena Plaza, in Budapest, in which Réka Szabó and Klaudia Tóth who played dancers in the circus scenes of the movie also attended. They will perform in our FlyingCircus show premiering on the 20th of April, of which dance acts will be choreographed by Réka.

All tickets have been sold to SLAVA’S SNOWSHOW!

We are happily announcing that all tickets have been sold to SLAVA’S SNOWSHOW which will be in the Capital Circus of Budapest with the co-operation of the MITEM Festival between the 11th and 14th of April for the first time in Hungary! However, on the webpage of MITEM Festival there are still tickets available in a limited number! Thanks for the outstanding interest!

The Phoenix has flown out of the Capital Circus of Budapest! 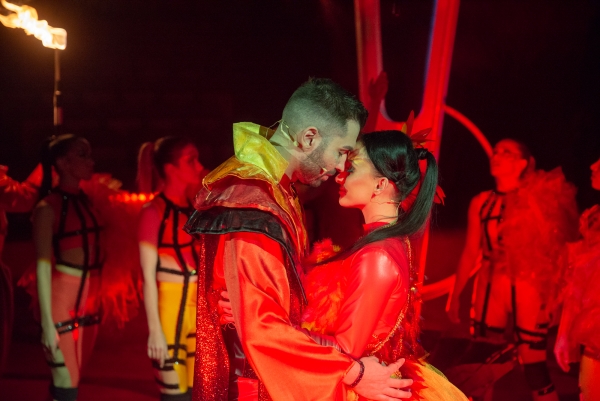 Today, on the 10th of March, at 15:00 we have held the last Phoenix – Circus of Fire show! The show was an enormous success, we have sold all tickets for the weekends and the last week. The directors and performers of the show, the Rippel Brothers built their show around the prime element of fire, which became the fundament of our whole civilization. All the productions of the performing artists – who were all Hungarians without the exception of Diaz Brothers – showed one of the aspects of the fire.

Gábor Németh enchanted the audience of Phoenix – Circus of Fire! 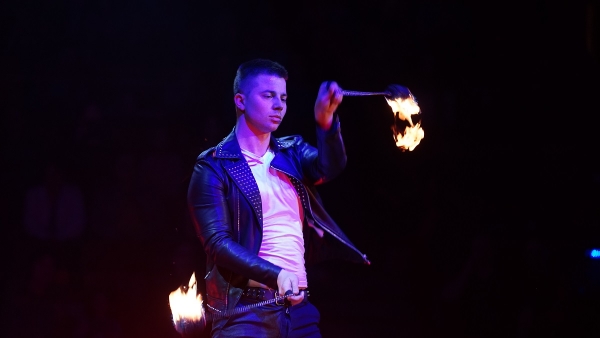 Today Gábor Németh performed his spectacular illusionist productions in the Phoenix – Circus of Fire show of the Capital Circus of Budapest directed by the Rippel Brothers, after Dávid Nagy Molnár stayed away due to health reasons. Gábor Németh, one of the most promising illusionist talents enchanted the audience and put smile on their faces with an illusionist and escapist act. His sensational illusionist productions will be in tomorrow’s shows in the circus before the Phoenix would fire from the circus floor once and for all!

Gábor Németh will perform in our weekend shows! 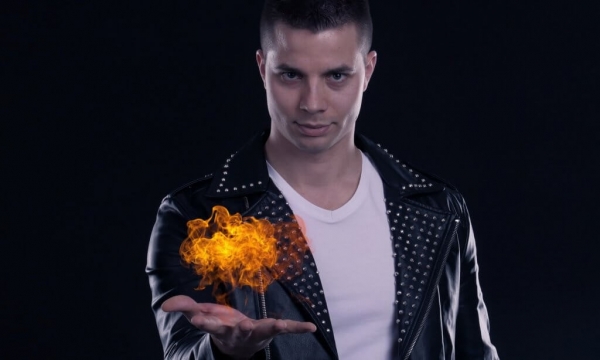 In our last five Phoenix – Circus of Fire show one of the most promising Hungarian illusionists, Gábor Németh will replace Dávid Nagy Molnár in the circus floor, who cannot take part in the production due to illness.

Inside information about the SLAVA’S SNOWSHOW and Slava Polunin 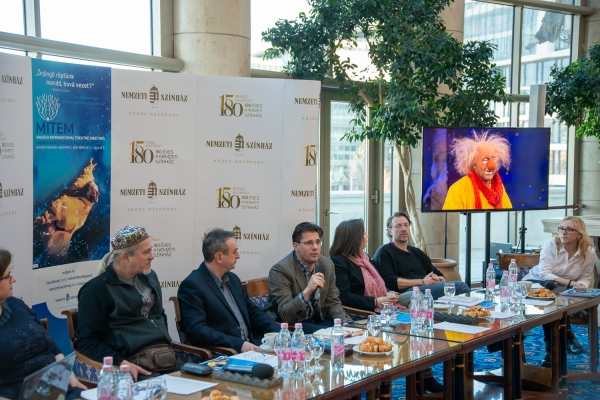 On the 5th of March 2019. the press conference of the Madách International Theatre Meeting (MITEM) was held in the National Theatre. The VI. MITEM Festival will start in the Capital Circus of Budapest with the SLAVA’S SNOWSHOW, that the audience can see on six occasions between the 11th and 14th of April. Dániel Levente Pál, dramaturg of the Capital Circus and András Kozma told us some interesting details about the world-famous production.

Under the spell of circus – Interview with Kevin Richter 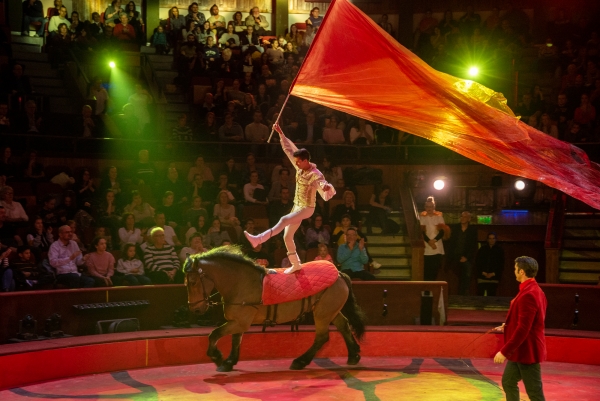 We talked with Kevin Richter, performing artist of the Phoenix – Circus of Fire show about his exciting production, the current innovative show which will end on the 10th of March and his plans.